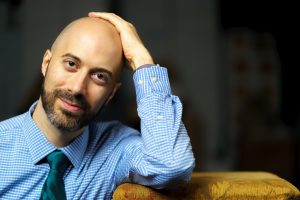 Adam Immerwahr (he/him/his) has served as the Artistic Director of Theater J since 2015. He is the former Associate Artistic Director at McCarter Theatre Center, a Tony Award-winning theater in Princeton NJ, where his directing credits include Sleuth, The Understudy, The Mousetrap, and a now-annual production of A Christmas Carol, and his producing credits include world premieres by Edward Albee, John Guare, Will Power, Christopher Durang, Marina Carr, Danai Gurira, and many more. He was the Resident Director at Passage Theater in Trenton, NJ, and the Artistic Director of OnStage, a company of New Jersey senior citizens who collected and performed the stories of their community.  Adam has directed at some of the top theaters in the country, including The Public and Theater Row (both for Summer Play Festival), Ensemble Studio Theatre, Walnut Street Theatre, Woolly Mammoth, McCarter Theater, Cleveland Play House, Theater J, Passage Theater, Luna Stage, Hangar Theater, Bristol Riverside, and many others. Internationally, he directed the African premiere of The Convert (nominated for Zimbabwe’s National Arts Medal). He was the recipient of 2010 NJ Theatre Alliance “Applause Award” and 2014 Emerging Nonprofit Leader Award presented by Fairleigh Dickinson University.  He serves on the Executive Committee of the Board of the Alliance for Jewish Theater, and is an inaugural member of the Drama League Director’s Council. Adam is a graduate of Brown University, where he studied both Theater and Renaissance/Early Modern Studies. www.AdamImmerwahr.com.

David Lloyd Olson (he/him/his) has spent over a decade managing nonprofit theaters, most recently serving as managing director of Quintessence Theatre Group in Philadelphia where he oversaw the organization’s largest ever fundraising campaign and the doubling of their annual foundation support. He was manager of the executive office and board engagement at the Shakespeare Theatre Company where he supported the transition of the theatre’s artistic directorship from Michael Kahn to Simon Godwin. He was a founding company member of Pointless Theatre in Washington DC where he served for ten years as managing director, during which time the company was awarded the John Aniello Award for Outstanding Emerging Theatre Company at the Helen Hayes Awards. He was an Allen Lee Hughes management fellow at Arena Stage and served as a Fulbright English teaching assistant in Valmiera, Latvia. He has twice been the recipient of a DC Commission on the Arts and Humanities fellowship program grant and was on the host committee of the 2016 Theatre Communications Group national conference. He attended the University of Maryland where he received a B.A. in theatre from the College of Arts and Humanities and a B.A. in government and politics from the College of Behavioral and Social Sciences.