Explore the World of The Wanderers

Back to The Wanderers

The Rise and Rise of Anna Ziegler

“Grounded by fantastically detailed and human characters, Anna Ziegler’s plays cut to the heart of some of the most complicated and contentious issues confronting society today.” 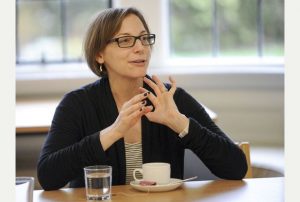 To an outside observer, playwright Anna Ziegler’s rise to fame looks meteoric. In 2015, when her play Photograph 51 opened on London’s West End starring Nicole Kidman, Ziegler had yet to receive a major New York production of any of her plays. Just two years later she had two productions running simultaneously at two of the most prominent New York theaters – Roundabout Theatre Company and Manhattan Theater Club.

Today, her work is in high demand across the nation as well as internationally. She currently has five active commissions and over a dozen productions of her plays slated for the 2019-2020 season, including one in Tel Aviv, one in Melbourne, and two this February in DC: The Wanderers at Theater J, and Boy at the Keegan Theatre.

Ask Ziegler about the success of her career, though, and she’ll tell you it didn’t happen overnight. “Right after grad school, I got into a couple of competitive workshops which were nice early signs that I had potential, but I wouldn’t say my career blew up. My sense is that it’s been more of a gradual burn.”

Ziegler’s interest in playwrighting is rooted in her childhood love of writing stories and poems. It wasn’t until the end of college, however, that she wrote her first play. “My senior year in college I took a course taught by the playwright Arthur Kopit. He also taught in the graduate program at NYU and encouraged me to apply. I thought that was an insane idea – I wasn’t a playwright; I hadn’t even written a whole play – but I did end up applying and going. And here I am today.”

After graduate school, Ziegler spent several years in DC where she taught creative writing at George Washington University and English at the Charles E. Smith Jewish Day School by day and nurtured her burgeoning playwrighting career by night. It was during these early days of playwrighting that Ziegler first became acquainted with Theater J. In December of 2006, Theater J included a reading of her play, Novel, in the now retired “Newish-Jewish” play reading series. The cast included Alexander Strain, who will play a leading role in Theater J’s upcoming The Wanderers.

Ziegler’s breakthrough into professional theater came in 2007 when her play BFF was produced at the DR2 Theatre in New York. From there, her career steadily grew as theaters across the nation began to commission and produce her work. Ziegler soon became a favorite at many theaters, finding several artistic homes for herself including Theater J, which has produced three of her plays: Photograph 51 (2011); Another Way Home (2016); and Actually (2018). Ziegler’s The Wanderers, which was first produced in 2018 at The Old Globe in San Diego, will receive its second production at Theater J from February 19 – March 15.

Taken all together, Ziegler’s plays are remarkable in the breadth of characters and scenarios they explore – everything from professional tennis players (The Last Match) to Satmar Hasidim (The Wanderers). Grounded by fantastically detailed and human characters, her plays cut to the heart of some of the most complicated and contentious issues confronting society today, including gender identity (Boy), the #MeToo movement (Actually), and sexism in the workplace (Photograph 51). When asked if there were any common themes in her work, she said, “I am drawn to things that are not black and white, where there can be discussion afterwards about whether people did the right thing, and whether or not it makes them a bad person if they did the wrong thing.”

The Wanderers is the result of one of Ziegler’s most recent forays into the realm of the morally ambiguous. The play follows two couples from two different time periods and two different religious contexts as they grapple with their marriages. If the premise sounds straightforward enough, wait until you see the play – it’s spring-loaded with one of the most shocking and well-devised plots twists you’re likely to experience in the theater.

When confronted with plays as heart-wrenchingly powerful as Ziegler’s, it’s sobering to think that had she come on to the theater scene even 10 years earlier, the chances of seeing her work would have been slim.

“In the time that I’ve been writing it has become a positive to be a female playwright. Theaters are more actively looking for work written by women and writers of color. It’s a really lovely moment to be writing, and a fantastic time to be a theater goer.”

A fantastic time, indeed – especially when it’s a Ziegler play you’re going to the theater to see.