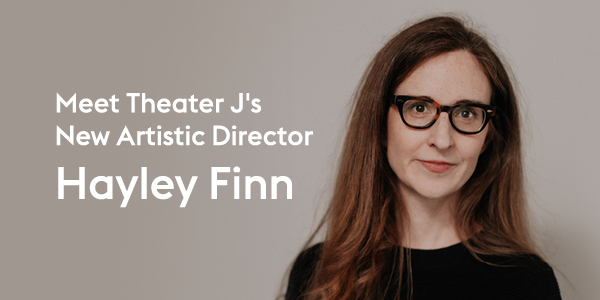 , the nation’s largest and most prominent Jewish theater company, is delighted to announce that Hayley Finn will become its new Artistic Director on February 1, 2023. Hayley Finn joins Managing Director David Lloyd Olson in the leadership of the theater, which is a program of the Edlavitch DC Jewish Community Center (EDCJCC). Finn comes to Theater J after sixteen years at Playwrights’ Center in Minneapolis, MN, where she served as Associate Artistic Director.

Finn is an accomplished director and producer with over twenty-five years of experience in professional theatre across all aspects of the profession, including producing, directing, casting, education, fundraising, and has been instrumental in creating national partnerships for theatres on Broadway, Off-Broadway, regionally, and internationally. At the Playwrights’ Center, Finn worked with some of the nation’s leading playwrights and in her tenure produced over 1,000 workshops. She has also served as a Co-Artistic Director of Red Eye Theater since 2019 where she co-produced and curated the New Works 4 Weeks Festival—an annual four-week festival that commissions 11 artists each year to make new performance works—and co-led the fundraising and development of a new 150-seat black box theater in Minneapolis.

As Artistic Director of Theater J, Finn will be responsible for conceiving, developing, and implementing the artistic vision and focus of Theater J. She will select the plays for Theater J’s 2023-2024 season and oversee the theater’s ongoing play development initiatives, including the Yiddish Theater Lab, which is dedicated to preserving and reviving the forgotten literature of the Yiddish Theater, and Expanding the Canon, which seeks to correct and broaden the historically limited portrayals of Jewishness on stage by commissioning seven racially and ethnically diverse Jewish writers to create new full-length plays.

“I am honored to become Theater J’s next artistic director and further its mission to tell stories illuminating the complexities and nuances of both the Jewish experience and the human condition through diverse perspectives and aesthetic visions,” says Hayley Finn.

“I am committed to building upon the theater’s rich legacy of producing vibrant theatrical works that pose relevant questions of our time toward inspiring greater empathy and understanding. During my career, I have worked closely with many incredible playwrights and am excited to continue to develop, produce and champion writers responding to our rapidly changing world. I look forward to collaborating with the staff, artists, the Theater J Council, the EDCJCC Board, and the greater community to create an inclusive creative space where artists can thrive, and audiences can have meaningful experiences at the theater.”

“I am excited that Hayley will be joining the Edlavitch DCJCC to continue the nationally-renowned work of Theater J,” says EDCJCC Chief Executive Officer Jennifer Zwilling. “I was delighted to interview Hayley as one of my first acts as CEO, and I am grateful to the search committee for their thorough process and tin recommending Hayley for the position.”

A search committee made up of members of the EDCJCC Board of Director, members of the Theater J Council, and theater artists conducted a nation-wide search. “After meeting with many extraordinary candidates throughout the search process,” said search committee chair and Theater J Council member Howard Menaker, “the committee unanimously chose Hayley for the role because of her deep producing and directing experience, her extensive knowledge of the best and brightest playwrights in America, and her deep commitment to equity, diversity, and inclusion.”

“Hayley Finn joins Theater J at a moment of strength,” says Theater J Managing Director David Lloyd Olson, “at a time when most theaters in the country have seen their subscription audience shrink, Theater J’s subscription audience is now larger than it’s been in the past seven years, and I believe that with Hayley as our Artistic Director, our programming will continue to grow a broad and diverse audience.”

Finn is an Alumna of the Drama League Director’s Program, recipient of the Ruth Easton Fellowship, TCG Future Leader Grant, National Endowment for the Arts support, and a Minnesota State Arts Board Artist Initiative Grant. She received her BA and MA from Brown University.